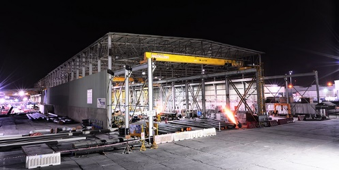 Multi-joint pipe facility was built as an internal project at Amelia, LA. Our responsibilities were to design and build the electrical systems, develop the construction document (CD) and related electrical plans such as the lighting, power, fire alarms/smoke detection system, and equipment and system grounding. During this process we received a PO to upgrade equipment in other areas of the facility, including switchgears, panels, motors, emergency generators w/ATS, power transformers, VFD’s, and UPS.

We, also, performed various power system calculations and studies. Based on our findings, we provided each piece of equipment an arc flash label that showed Level 2 and above, and trained the electricians with the requirements of OSHA 1911-10 and 29 CFR part 1926. We developed specifications for the project, and provided the final electrical system and automation design drawings to JRM’s Houston headquarters. Upon approval, we supervised the construction phase inside the existing Morgan City facility.