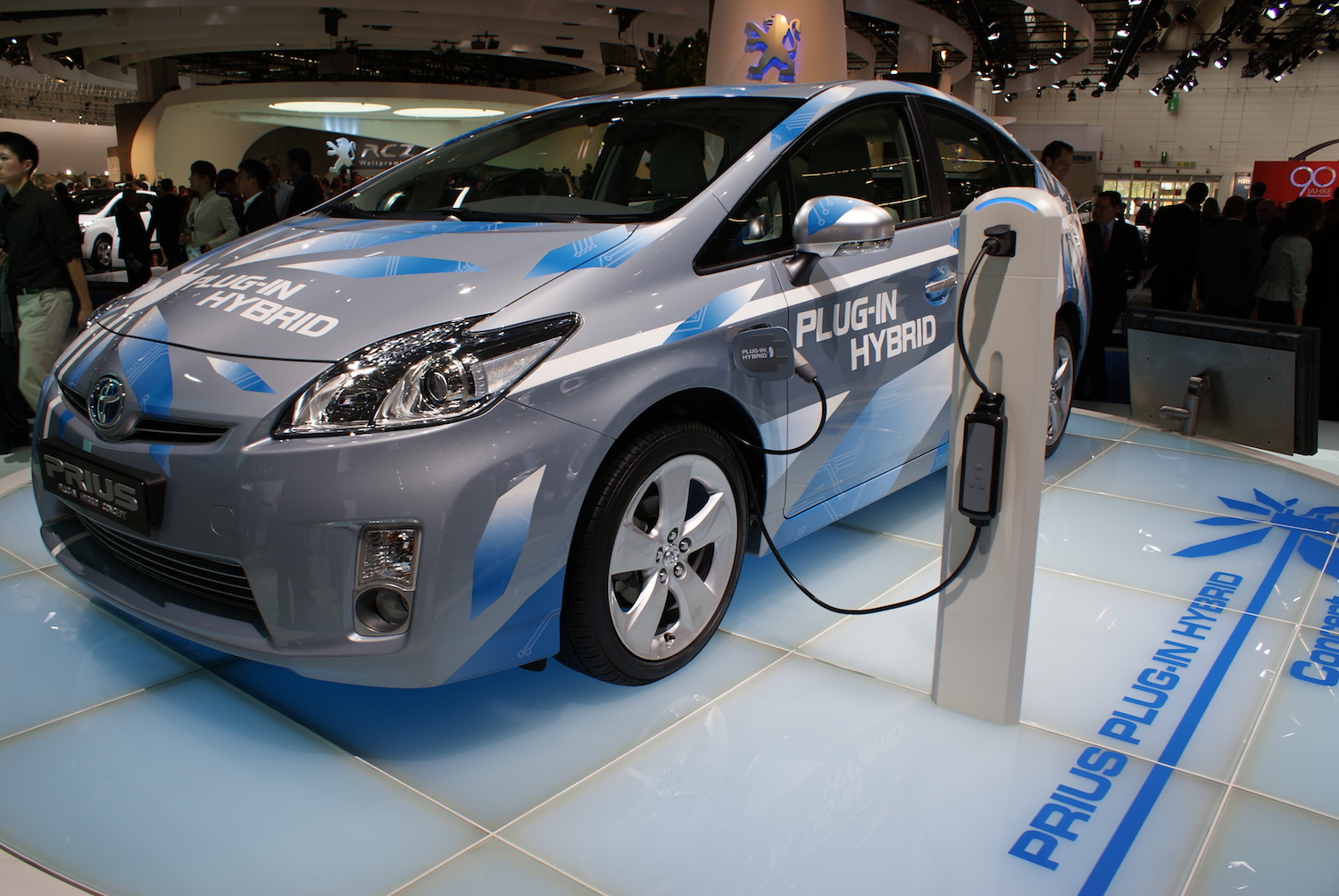 Plug-in electric vehicles (PEVs) use electricity from the energy grid to charge large battery packs, then use the batteries to power an electric motor. They are primarily powered by electricity instead of liquid fuels and produce no tailpipe emissions. Plug-in vehicles can also generate power from regenerative braking systems, which convert kinetic energy from the vehicle’s brakes into electricity that is stored in the battery pack. Since plug-in vehicles rely on rechargeable batteries for power, each vehicle has an electric range—the maximum number of miles it can travel on battery power before it needs to recharge. Applications for these vehicles go beyond just passenger cars (though U.S. consumer passenger PEVs are largely the focus of this fact sheet), as there are currently plug-in electric buses, utility trucks, high-performance vehicles, and motorcycles.

There are two main types of plug‐in electric vehicles:

Because plug-in vehicles consume electricity instead of liquid fuel, the U.S. Environmental Protection Agency (EPA) rates their miles per gallon equivalent (MPGe) instead of their miles per gallon (MPG) to measure how efficient such a vehicle is with the electricity it consumes. The EPA equates 33.7-kilowatt hours (kWh) of electricity to one gallon of gasoline. A PHEV receives an MPGe rating for its battery-electric motor and a separate MPG rating for its combustion engine. Carmakers must also list the vehicle’s average energy consumption over 100 miles, either in kilowatt-hours of electricity or gallons of gasoline, to show the true usage of energy by a vehicle.

It is important to note that while plug-in vehicles produce no tailpipe emissions, generating the electricity plug-in vehicles use may produce pollution, depending on the energy source used. Nevertheless, even though about two-thirds of U.S. electricity is generated by carbon-emitting natural gas and coal, the electricity required to power BEVs produces less than half the carbon dioxide of a conventional internal combustion engine (ICE) vehicle. And, BEVs do not emit the harmful particles released by gasoline-powered engines, which means battery electric vehicles have the potential to save billions of dollars in health and climate costs. Indeed, a study performed by the American Lung Association of California found that gasoline vehicles are responsible for $37 billion in health and climate costs each year. Put differently, every 16-gallons of gasoline (representative of a typical tank) combusted adds $18.42 to public health and climate costs. The study found that if electric vehicles represent 65 percent of all cars on the road in 10 western and eastern states by 2050, those costs would drop by $21 billion.

The availability of electric vehicles has been spotty in most of the United States. Between the years 2010 and 2016, automakers have brought more than 24 electric vehicles to the market, and sold over 400,000 new PEVs; however, almost half of these sales occurred in California, where electric vehicles benefit from generous rebates, a widespread charging infrastructure, and carpool lane privileges. California sales were mostly comprised of the Chevrolet Volt, the Nissan Leaf, and the Tesla Model S.

California and nine Section 177 states have the Zero Emission Vehicle (ZEV) program, which requires automakers to sell electric vehicles. But because of a loophole, the ZEV program has caused automakers to make more models available for sale in California rather than in other participating ZEV states. Indeed, the ZEV program’s travel provision allows for earned ZEV credits in any ZEV state to be counted toward the mandate of any other participating state. This allows automakers to sell enough electric vehicles in California to meet the obligations of the other nine states; however, this provision will end after 2017, forcing auto dealers to meet ZEV sales quotas for individual states beyond California.

The travel provision has also impacted the customer awareness of PEVs. Car companies are focusing much less on PEV advertising outside of California. According to studies performed by CompetiTrack and Motor Intelligence, GM advertised the Volt nearly 800 times in California in 2015, but only advertised the Volt to a Northeast-focused audience about 10 times. Lesser known PEV models fare even worse. Ford advertised its gasoline-powered Ford Focus 4,750 times nationally, but the Focus Electric was only advertised 200 times. BMW, Nissan, GM, and Ford spent virtually no money on advertising the i3, Volt, Leaf, or Fusion Energi to Northeast audiences, but for California, their range of spending was between $1-3.5 million. Among national audiences, electric vehicle advertising ranged from zero dollars, for Ford, to nearly $19 million for BMW. Even with this low level of advertising and awareness, the sales of electric vehicles have continued to rise.

Automakers are showing a deep interest in further developing the plug-in vehicle marketplace. In 2015, Ford announced that it was going to invest $4.5 billion into electric vehicles that would yield 13 new models. In addition, Ford also declared it would invest another $700 million in expanding the company’s Flat Rock factory in Michigan to help in the manufacturing of electric vehicles. Volkswagen has declared it will invest $2 billion over the next 10 years in the United States to support electric vehicles, develop charging infrastructure, and build awareness. This investment will take place under a new subsidiary of Volkswagen, Electrify America LLC, and is part of the legal settlement with EPA following Volkswagen’s cheating on emissions tests for diesel vehicles.

Plugging into the Grid

There are three common electric vehicle charging station voltage levels, with 120-volt, 240-volt, and 480-volt models. The most common form is the 120-volt charging unit, or AC Level 1. This method of charging can use standard wall outlets and usually requires no additional installation cost on the part of the operator. Unfortunately, 120-volt charging is slow and typically provides only 3-5 miles of range per hour of charging. Depending on the BEV’s battery size and its state of charge, charging to full capacity could take between 8 and 20 hours. For cars possessing especially large batteries, a full charge from a depleted battery would take even longer. The charging time is cut significantly by using an AC Level 2, 240-volt charging unit; however, they typically require a licensed electrician to install, as they need a dedicated circuit. Some residential users choose to install these units for in-home charging, but they can cost between $600 and $3,600. As a result, Level 2 charging units are mostly confined to public charging stations. Fast-charging systems that use 480 volts DC allow for roughly 80 percent of the battery to be charged within about 30 minutes; however, they are the most expensive, and are only appropriate for public charging stations.

Utility companies and industry are also making a push to build charging networks for electric vehicles. In California, three of the largest utilities, Southern California Edison, Pacific Gas & Electric, and San Diego Gas & Electric, have proposals for building out charging stations for the state totaling $1 billion. Both BMW and Nissan have partnered with EVgo to build 668 DC fast-charging stations in over 50 metro areas and are in the middle of building an additional 174 DC fast-charging stations across 33 states. Tesla has continued to build out their Supercharger network, which currently stands at 373 sites across North America.

Sorry, the comment form is closed at this time.